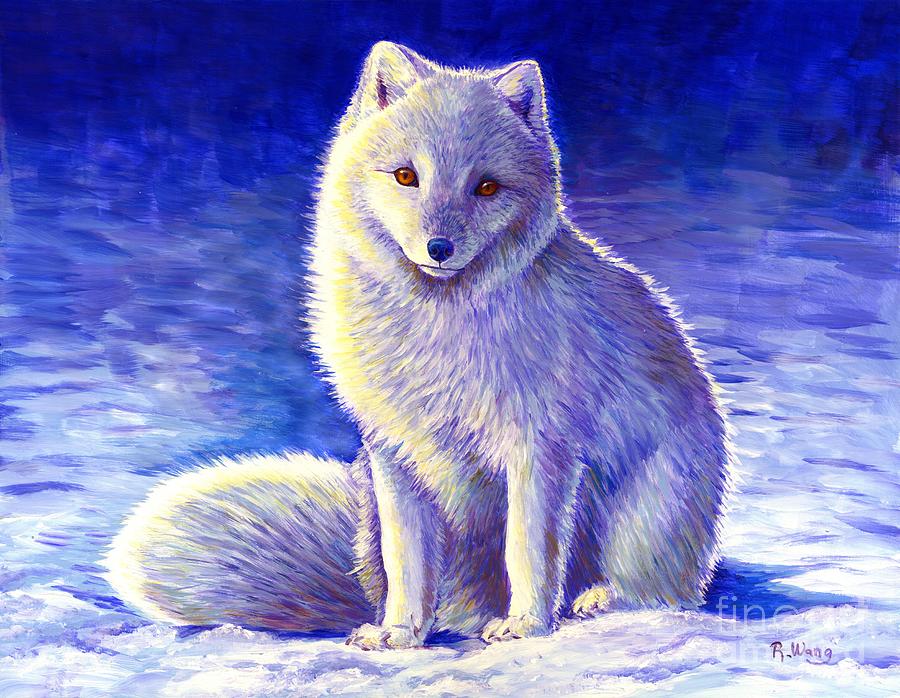 Original - Not For Sale

This piece is not for sale.   Please feel free to contact the artist directly regarding this or other pieces.

A colorful painting of an Arctic Fox in vivid blues and purples in a snowy wintery landscape in the high Arctic circle.

The Arctic Fox (Vulpes lagopus) is also known as the polar fox, white fox, and snow fox.  They are a small species of fox that are native to the Arctic regions of North America, Iceland, Greenland, Europe and Asia.  They are a member of the vulpine group of foxes, which is also known as the "true" foxes, which consists of 12 species and includes the red fox, kit fox, and fennec fox. There are five subspecies of Arctic fox, with four distinct subspecies living on islands.

Artwork Copyright © Rebecca Wang, https://www.psychedeliczen.com, All Rights Reserved.
Their thick fur keeps them warm and camouflaged in their cold home environment. The bottoms of their foot pads are completely covered in fur to insulate them from the cold. They have other adaptations to the cold, such as their short round ears, short legs, short muzzle, and compact body. There are two color morphs of the Arctic fox: the white phase and the blue phase. The more common white phase changes color with the seasons. They are solid white with longer fur in the winter, and have shorter gray fur in the summer. The rare blue phase is a longer solid gray in the winter and shorter darker gray in the summer.  The white phase is usually found inland while the blue phase tends to live along the coastal regions.